Thoughts on punishment and deeper control

Along with the holidays, we have had family over as well as a lot of "life" stuff going on.  I haven't been dressed feminine as much nor have I been in chastity.  Even though life has prevented me from being dressed as much as usual, I still have had a few opportunities to be dressed.  The nice thing is when I am out of chastity my wardrobe options expand greatly.  I can wear pants and panties that are too tight when I am locked up.  The bad thing is I am not thinking about my cock 24/7, but but my has had a chance to recover from the device.

One of the side effects of me not being able to dress as much is that I have cheated a bit.  Out of sight out of mind I guess.  There was one afternoon that turned into night that I didn't change when I got home.  As well as last night we were out and about and I was wearing nothing feminine under my clothes.  Mistress has been great about calling me out on this.  In my mind I can generate reasons why I should be exempt, but they are BS reasons.  I have agreed to certain rules and I haven't followed through.  In reality I want to be called out and dealt with appropriately.  Without a doubt I would be an absolute hard ass about the rules if the tables were turned and I was the dominant one.

Last week I was reading one of the blogs that I reference occasionally on this blog.  As I try to understand my mindset, what makes me tick, and how to convert this to a successful D/s relationship I look to other sources.  Sometimes I read something and it's interesting.  But when I find myself thinking about it several times for days, I realize it's something more.  The below quote is one of those things.

So: A true submissive needs to feel they are helplessly under the control of a sadistic dominant. That they have zero power or influence. That is achieved by two things.

(A) Punishments for infractions have to be truly feared by the sub. This is achieved by not stopping the punishment until the sub is and has been truly begging with all their heart for a few minutes for the punishment to stop. My lifestyle did not click into place until I started doing this 6 or 7 years ago. It is easy to judge when the begging has reached the truly heartfelt, and then you keep going for a while. You will not break or damage him. During the punishment, he will be begging and attempting to have you stop. After it, he will be in awe of you and want to worship you. Bind him so he cannot move, gag him and then apply the punishment. It may only need to be six HARD cane strokes, if he is begging with all his heart after the first. If he has marks on his butt for the rest of the day, he will love that. If the marks last 3 days, he will love it even more.

(B) The true submissive has to undergo things they really do not like. By this, it is reinforced that they have zero power or influence, that they are helplessly under the control of a sadistic dominant.

If you love your submissive and you wish to be kind to your submissive and have him sleep the most sound and contented sleep they can ever know, then the saying -‘you have to be cruel to be kind’, is the mantra by which you must live.  The deeply submissive male is a paradox. They need to feel helplessly controlled by another person...  So real love and kindness for a true submissive does not mean going easy on them in any way, or being fair with them – that causes discontent and unhappiness and is not being kind.

Here is a question by a reader and an answer by a random woman (not the author of the blog).

Question:
J.W. says:  I love my Wife with all my heart. However, most of the time I am more of the Alpha. Like all of us, she has her tribulations, and I have to be there to help her. That is what life is about IMHO. On the other hand. At the same time, I so crave to be dominated. And yet I wonder if I’m truly a submissive, because I find that I only like to be dominated during sexual activity.

Reply:
Mila W. says:  J.W., perhaps I can shed some light on your predicament as I went through a similar stage with my husband. He always claimed to want to be submissive, to be punished and submit to my will. Yet I soon learned that he only wanted to be punished on his own terms and only for his own sexual gratification. After he would orgasm, he would revert to his former self. He would disobey a rule and claim to be willing to accept whatever punishment I had in mind. My preferred methods are caning and public humiliation. Early in our relationship, I would tie him down and begin caning. After the first stroke or two, he wanted no part of it, demanding to be released and telling me he had “changed his mind” about his submissiveness. He would go so far as to threaten to leave me as he stated I couldn’t love him if I could hurt him like that. I would always stop and the cycle would repeat itself, over and over.

I’m not naturally dominant – or at least I thought I wasn’t – and I became frustrated, overwhelmed even, as I didn’t know what to do to break the cycle. And then I found Mistress Scarlet and this blog and it was as if the seas parted. I finally understood that no man whether “truly submissive” or not could be broken or controlled unless pushed beyond his limits. As Mistress Scarlet continuously reinforces on these pages, punishment cannot be fun. If I only played at punishment as he preferred, I was only reinforcing his belief system and perpetuating the cycle. I will never forget the first time I pushed through his limits as well as my own. 3 strokes became 5, which became 10 and then 50. He screamed and swore and threatened and cried. After the caning, I asked him if he understood that things had changed and that I would no longer be bullied and that I would be firmly in control. He agreed as I had hoped but had been dreadfully afraid he wouldn’t. I told him to lay there and really think about it.

Several hours later I asked if he would accept his new role and any punishment I might decide on. Again, he agreed and asked if he could be untied. No, I told him and warned him not to ask again. I went to bed and in the morning asked if he was ready to begin his new life. He started crying and told me that he had been waiting for this since we first met and, yes, he was ready. Good, I told him and took out the cane once again. I gave him 50 more lashes and this time there were no words, no threats – only tears.

That was just over a year ago and I have implemented more of Mistress Scarlet's philosophies into our relationship which is now better than ever. He no longer asks to be submissive and to be punished. He just is. Thank you, Mistress Scarlet.

None of the above is meant to be pushy.  In fact the level they are talking about scares the crap out of me.  At the same time, it speaks to me.   I believe that is where so much of my internal conflict comes from.  Wanting harsher treatment but pushing back when I get it.  Until now, I've never understood or have been able to put these thoughts into words.  Finding another's words makes it easy to explain what goes on in my mind.  We shall see where this heads. 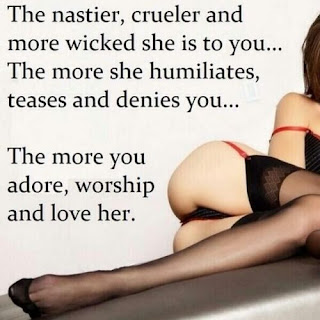