I read a lot of things online about D/s.  What I am mostly drawn to is people being treated badly by their dominant.  I prefer women treated men cruelly, but there just aren't enough people that post about their experiences in a female dominant sense.  There are even fewer that post pictures.  This means I end up looking at many blogs and pictures of women being treated poorly when looking for pictures of a certain topic.  When I see these pictures of women being treated cruelly I don't fantasize about myself being cruel to women (although I could if Mistress would switch once in a while).  I fantasize about me being treated as much like those women as possible.  Here is a summary of some of the blogs I like to visit and get myself all worked up thinking it's me being treated this way.  I am fascinated by the cruelty.

http://strictjuliespanks.blogspot.com - is my favorite.  They are a couple that seems to live a normal day to day life, but when they turn on the kink, they turn it on. The husband gets spankings I dream of trying but don't think I could take.  They bring witnesses and participants into his beatings and humiliation.  Then at the end of the day they go back to being a normal couple.

https://msscarletuk.wordpress.com - is one that actually scares me as much as it enthralls me.  She is truly cruel and I am mesmerized by it.  Some of her tortures include frequent application of Deep Heat to his cock and balls.  She also uses stinging nettles but I don;t know where to get those.  Ice cubes of her piss being delivered into his mouth drop by drop through a funnel gag.  A caning before he misbehaves and to set the tone for the day.  He spends hours 4-8 hours at a time tied to a bed with a hood on, blindfolded, his ears plugged, and those ice cubes so all he can think of is his evil Mistress.  She in turn binge watches a show or some other activity she enjoys getting turned on at the thought of his suffering.  She visits him every 30-60 minutes to refresh the Deep Heat or the ice cubes.  Lastly instead of letting him dress as a woman she makes him dress as a little girl. 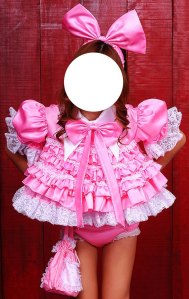 http://kittydenied.tumblr.com a female sub that has to endure chastity, denial and lots of deep throating practice.  One of my favorite fantasies is pictured below.  Having my arms bound behind my back and being told to get to a certain number (not too low).  I would have to take the cock down my throat far enough to get my nose to hit the button. 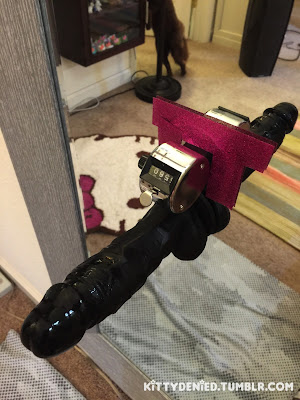 https://greyhoundsowner.tumblr.com - my new favorite.  If only this was a guy being treated this way.  She it totally subjugated.  Her diet is controlled.  She has to use a litter box. She must wear heels at all times, if not, her heels are not allowed to touch the floor.  She is plugged at all times.  She is in chastity at all times.  She is tied to a bed or caged every night.  She is restrained for hours on end in very painful positions. He uses a cattle prod on her.  I can only imagine how terrible this would be to endure, but at the same time, I wish I were her. 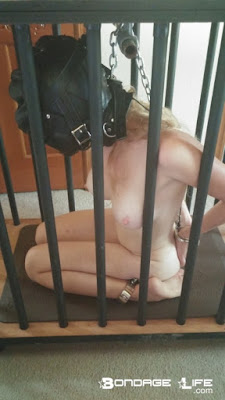 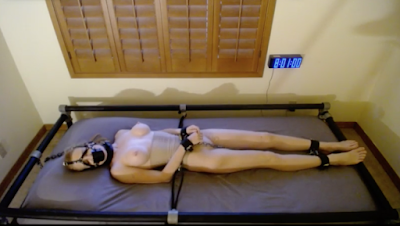 Here are some other "go to" sites, but not as mean as the folks above.

https://dominajen.com  This is the blog that taught me the disobeying is a reaction to insecurity. Instead of backing down when a slave disobeys, it's time to double down.  I also like reading about her taking her feminized slave out in public.

http://totallysubjugated.tumblr.com -  A Tumblr blog devoted to the overall surrender of control. To be caged, boxed, confined; to have your freedom and choice of movement eroded away. To become completely and totally, subjugated.