I had no intention of posting today.  That changed last night.  Mistress was teasing her cock and balls locked in my chastity device.  She told me that I was to wear feminine clothes in the morning.  She specified high heels, a skirt and a bra.  The rest was up to me.  Now Mistress rarely makes me wear a bra, so that added requirement was a nice little torture/bonus.  Mistress also told me that I needed to do the dishes first thing in the morning.  I thanked her for giving me tasks to do as her cock grew even harder in its cage.  She warned me that any disobedience would result in me spending several hours locked in the cage while she went to happy hour.  She teased her cock a bit more and then told me to have sweet dreams.  She wrecked me.

As I was waking this morning I was immediately turned on.  Mistress had gotten up before me so I was happy to be locked in chastity. Even on the honor system, I will edge myself if she gets up before me.  When I got out of bed, I sprayed my perfume on before I did anything.  I needed the extra time to have the perfume push my feminine buttons as I find it challenging to be dressed if Mistress is awake before me.  I went into the spare bedroom and put on a bra and panties.  I then inserted my breast forms.  I put on a long sleeve cowl sweater, a black skirt and black Mary Janes with 5" heels. 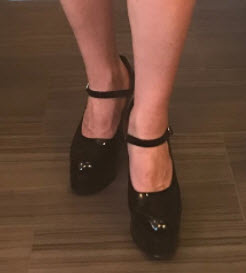 I considered not getting dressed for a minute and thought about saying I forgot.  I wanted to see if Mistress would go through with the punishment.  Not because I wanted to be punished, but I wanted to test her resolve.  I decided obedience was a better course of action so that maybe I can be rewarded with other tortures.

I immediately started on the dishes.  There isn't one thing sexy or erotic about doing dishes.  However, being commanded to do dishes while dressed up is very much a turn on to me.  It's about the control she is taking and the control I am giving up.  I made sure to also clean up the counter and the rest of the kitchen a bit.  I wanted to show my appreciation for being giving house work chores.  As I went about cleaning I realized that it had been about 4 months since I was dressed feminine.  I missed it.  I felt like kind of a 50's housewife doing chores, all dressed up and in heels while the husband sat on the couch.  It pushed my buttons.

As I sit here typing this my arousal is off the charts.  Mistress' cock is straining in its cage, my feet are a bit uncomfortable and my breast forms weigh heavy on my chest.  I am in heaven.

In closing, I want to thank Mistress for making me get dressed and giving me orders.  I want her to feel confident in making me do anything she wants me to do and want her to feel even more confident on ignoring my needs and wants.  I am her slave.
Posted by Miss Bossy Bitch's boy at 6:46 AM