Mistress has learned that putting me in the cage in the basement can correct some behavior she doesn't like or to put me in my place.  It works in that respect but I don't fear the cage however.  I dislike it but I don't fear it.  I believe the longest I have been in the cage is about 2-2.5 hours so maybe it's a time issue, but I don't see me "fearing" it.  I would hate to see how long I would have to be in it to truly fear it.

Being in chastity is another form of control, and it's very real control, but I don't fear it either.  In fact I am working on finding the holy grail of chastity.  Something that utilizes my Prince Albert piercing, but is also supported by my testicles.  The piercing is the only 100% escape proof way to secure a device and the piercing only devices put too much stress on the piercing.  I think I have found it but will have to wait to purchase it.  A device similar to the one below gets very high ratings from a blogger known for his chastity experiences.  https://denyingthumper.com/2016/11/15/rigid-chastity-halfshell-review/ 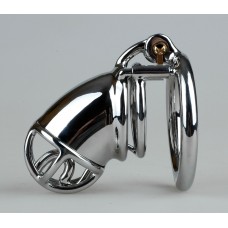 Being locked in chastity for months would be challenging but I certainly wouldn't fear it.

The same goes with orgasm denial.  I would look forward to the challenge, and would enjoy the difficulties.  I would love to fear denial, but am not sure I could.

So that has me thinking about true fear.  Fear that provokes a fight or flight response.  Fear the requires restraint or force for me to endure.  My main fears are pain, electricity and public humiliation.

There are obviously ways to create lots of pain.  However for purposes of pain for punishment and control, I keep thinking about beatings.  There are 2 articles I have read over many years that stick with me.

The first one I read many years ago.  It still scares me.  I like that the punishment is fast, but I don't like that she doesn't restrain her husband.  I would turn around and stop if it left unrestrained.  Here is a link to her process http://www.bellaslist.com/stories/story_16.shtml

The other article also scare the heck out of me.  http://strictjuliespanks.blogspot.com/2013/03/beating-your-man-properly.html

In the first article she uses no restraints and in the second she releases him soon afterward, I would need to stay restrained until I recovered and was able to process what happened.  Then I know I would be fine and could react positively to Mistress.  I am sure I would not be positive once I truly got pushed past my pain threshold and truly wanted it to stop.

I can imagine I did something wrong or forgot to do something I promised.  I'd get a text during the day that I was going to be punished.  I would suffer all day with the thought of what was going to come when I got home.  The anxiety would be as bad as the punishment.

Other pain includes a clothespin zipper, being tied up in painful positions like the wooden stocks, icy-hot in sensitive places, forced to walk in high heels on the treadmill, and rubber bands.

Electricity can cause pain but it also causes a ton of mental anxiety for me.  I think it goes back to watching bad movies on the 80's.  The picture below is from a Charles Bronson Movie from 1983.  It still sticks in my mind.  The guy is naked and electrodes are attached to his genitals and he tortured by a bad guy. 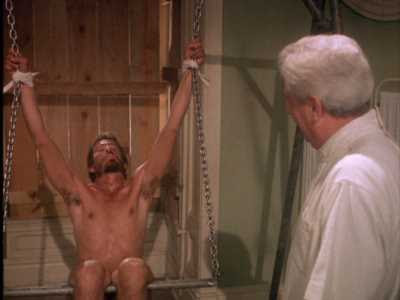 Electricity has a certain simplicity to it.  It takes zero effort from the person administering it.  In the case of a tazapper, stun gun or cattle prod the device itself can provoke massive fear even if not used.  Just the threat of it is enough.

As far as using electrodes and an e-stim device, I also fear that.  While the device can be used for amazing pleasure it can also produce intense pain.  There is even a setting on our device called "torment".

Unlike a beating that is very physical and obvious, electricity is invisible.  I think that is what scares me so much.  I can imagine being tied down and having electrodes attached to me while Mistress lectures me on my misbehavior.  I would be begging and nearly in tears.  I would be very fearful.

Lastly is public humiliation.  Since I have such a strong fight or flight response I don't see this one happening without a threat or actual use of the previous fear tactics.

In closing, I love the idea of Mistress not only being able to control me through things like a cage, my collar and chastity, but being controlled with the threat and actual use of severe pain.  I believe that being truly afraid of what could happen, would further cement my place in our relationship.  I would be much less likely to try and manipulate things to my advantage or "forget" to do things I am supposed to do.

On top of all of that there is something very hot to me to be punished harder than I have ever been punished.
Posted by Miss Bossy Bitch's boy at 8:02 AM